Be the first to review this product
$13.99
In stock
SKU
NPR1005JC
Add to Wish List Add to Compare
Email
Skip to the end of the images gallery 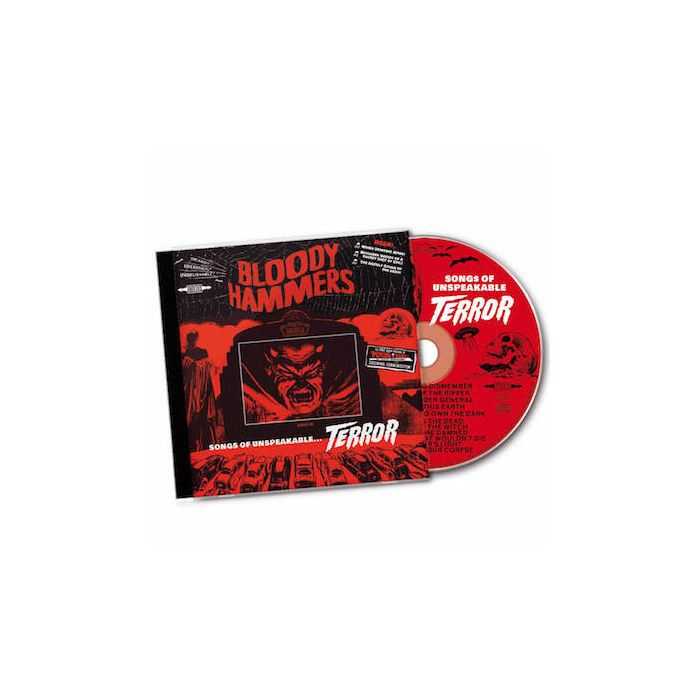 Fans of BLOODY HAMMERS have been riding the Transylvania County, North Carolina-based husband and wife duo’s wavelength of heavy metal, doom and goth rock since their formation in 2010 – but never have they encountered a haunt like this! While it doesn’t stray too far from the sound listeners have grown to infectiously adore, the band’s latest full-length offering – Songs Of Unspeakable Terror – explores territory yet uncharted by the band: retro-ized horror punk in all its gritty glory. This beastly follow-up to the band’s standout 2019 full-length The Summoning shouldn’t be confused as an all new direction for the band, however. These songs are a pandemic lockdown labor of love, a temporary foray into the unknown, while still remaining true to the BLOODY HAMMERS trademark. At the start of 2020, having just released a new album under his darkwave solo project, vocalist/guitarist/bassist Anders Manga was about to head out on tour when COVID-19 hit. Soon locked in their house under the country’s strict stay-at-home orders, Manga and his bride and bandmate, organist/pianist Devallia, spent time jamming in their basement and revisiting some of their classic punk favorites from up north – the Misfits, Plasmatics, the Cramps and Voluptuous Horror of Karen Black, to name a few. Holed up and barred from the uncertainty of the world, BLOODY HAMMERS churned out 11 new raw-power tracks inspired by these greats, and now, they’re unearthed… from the grave! Kicking off with a hefty two-step, first single and album opener “A Night To Dismember” careens the listener down a dark, winding auditory road of melodic punk (in a jet black classic car, to boot), motoring on with an earworm chorus that will have listeners chanting in no time. Trudging, metallic terrors like “Hands Of The Ripper” and “Witchfinder General” ensnare the listener, while seductive, unrelentingly heavy tracks such as “Not Of This Earth” will have them screaming for more, and head-bobbers like “The Ones Who Own The Dark” prove this horror punk offering isn’t short on melody. Laced with spine-tingling vocal lines, bathed in a seductive, macabre cocktail of granular guitars and accented by searing synths, each track on Songs Of Unspeakable Terror is a bonafide horror punk pillar. Fans of BLOODY HAMMERS and heavy music fans new to the band alike will enjoy this unique offering, available in digital, CD jewelcase and multiple vinyl variations on January 15, 2021 via Napalm Records!